Queen Elizabeth II Death Live Updates:  The state funeral for Queen Elizabeth II will take place at 3.30 PM (IST)  on Monday, September 19 at Westminster Abbey in London. According to the information provided by England’s most senior peer who is in charge of state occasions, the coffin will be taken from Balmoral Castle to Edinburgh on Sunday before being flown to London on Tuesday. It will later lie in state at Westminster Hall from Wednesday until the morning of the funeral at London’s Westminster Abbey. Details on the 96-year-old queen’s funeral will be released later, but organizers described the ceremony as a “fitting farewell to one of the defining figures of our times,” AP reported. Elizabeth, Britain’s longest-reigning monarch died Thursday, September. 8, 2022, at her summer retreat in Scottish Highlands.
Earlier in the day, King Charles III was proclaimed Britain’s new monarch in two ceremonies in London, at Accession Council and at the Royal Exchange, which was televised for the first time in history. “God save the King” were the words proclaimed at both ceremonies accompanied by a gun salute. The throne had passed to the 73-year-old former Prince of Wales following the death of his mother, Queen Elizabeth II, on Thursday and Saturday’s ceremony marked his formal declaration and oath-taking at St. James’s Palace in London. Following the proclamation, King Charles III held his first Privy Council meeting and made his personal declaration to “assume the duties and responsibilities of sovereignty” and follow in the footsteps of his late mother.
Late Friday, in his first address to Britain as monarch, King Charles III expressed “profound sorrow” at the death of his mother Queen Elizabeth II vowed to carry on the queen’s “lifelong service” to the nation. Mourners at the service included Prime Minister Liz Truss and members of her government. Earlier on Friday, King Charles had also bestowed the titles of Prince and Princess of Wales on his eldest son William and his daughter-in-law Kate, who are the next in line for the throne.

Britain’s Prince William said on Saturday that he knew the day would come when his “Grannie” Queen Elizabeth II would be no more but that it would take some time for the reality to sink in, as he reflected upon how the world had lost an “extraordinary leader”.
In his first statement as the Prince of Wales and heir to the British throne, posted on Instagram, the 40-year-old said he would honour the memory of the late monarch by supporting his father, the new monarch.
“I knew this day would come, but it will be some time before the reality of life without Grannie will truly feel real,” William said in his short statement.
“On Thursday, the world lost an extraordinary leader, whose commitment to the country, the Realms and the Commonwealth was absolute… I, however, have lost a grandmother. And while I will grieve her loss, I also feel incredibly grateful. I have had the benefit of The Queen’s wisdom and reassurance into my fifth decade,” he said.  (PTI)
Prince Harry and Meghan join Prince William and Kate in viewing floral tributes to the late queen in Windsor. 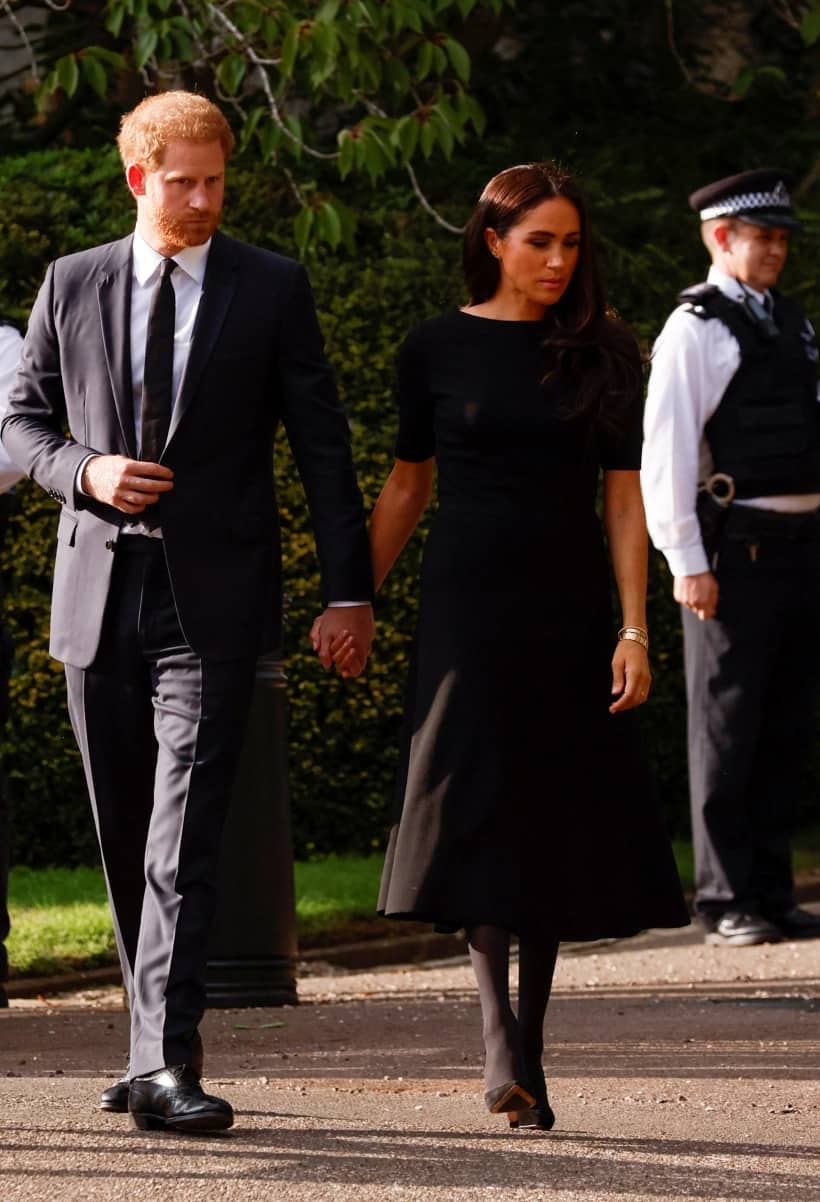 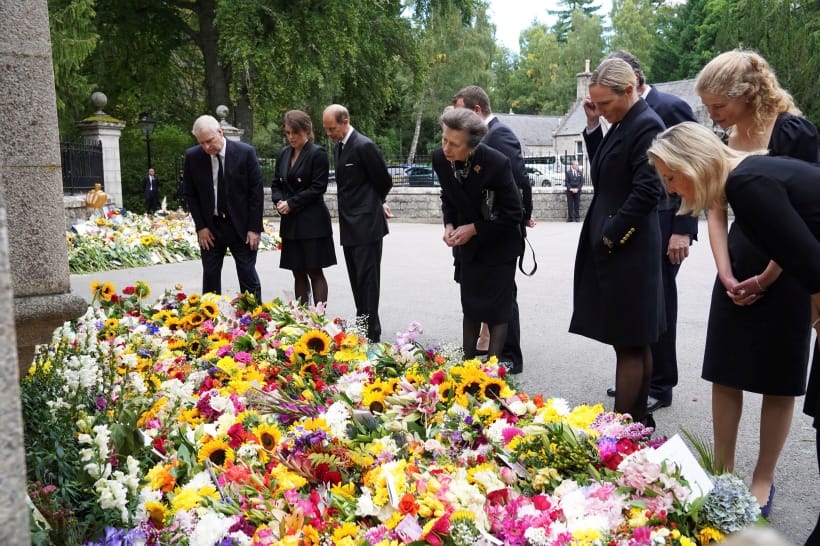 (Photos: Reuters)
Queen Elizabeth II, the UK’s longest-serving monarch passed away at Balmoral Castle in Scotland on Thursday (September 8). While the plan of action following her death was carefully laid out, there is uncertainty over the fate of her cherished dogs: the famous corgis.
An enduring symbol of her legacy, the corgi breed has come to be associated with Queen Elizabeth’s 70-year-long reign. She had a lifelong love for her pet corgis, who accompanied her during vacations and official events in Buckingham Palace, her honeymoon, and even featured in her official photos and portraits. Fed gourmet meals of rabbit, steak and vegetables made by royal chefs, the corgis were even given their own stockings on Christmas by the Queen, filled with toys and doggy treats. Read our explainer here
Never, perhaps, has an heir been more ready for the crown. Charles, the eldest son of Queen Elizabeth II and a man born to be king, acceded to the throne Thursday after being the designated successor for longer than anyone in the history of the British monarchy. As King Charles III, he will become sovereign of the world’s most important constitutional monarchy, head of the most storied royal family and a symbol of continuity in a storm-tossed country.
Having aged from an awkward, self-doubting young man into an unhappy middle-aged husband, Charles has become, at 73, a self-assured, gray-haired eminence, steeped in causes like climate change and environmental protection, which were once quirky but now seem peculiarly in sync with the times. Read More
King Charles III on Saturday signed the declaration which officially made him the new British Monarch using ink from a silver pot gifted to him by his sons, Prince William and Prince Harry.
King Charles was on Saturday proclaimed Britain’s new monarch in a historic ceremony of the Accession Council. He was joined by his wife, Queen Consort Camilla, and his son and heir Prince William – the new Prince of Wales, who added their signatures to the formal proclamation documents.
During the meeting, which was televised for the first time in history, Charles had to sign two copies of the declaration. He did so using a fountain pen with black ink from a small silver pot. Camilla and William also used the pot when they signed the documents, the Mirror newspaper reported. (PTI)
Tibetan spiritual leader The Dalai Lama has written to King Charles III to offer his congratulations on his accession to the throne.
In his message, the Dalai Lama said, “I am confident that you will fulfil this great responsibility with kindness and affection, dedicated to the service of others.” “Since I have the honour of counting Your Majesty as a dear and respected friend, it is a joy for me to see your being proclaimed King of the United Kingdom,” he said.
“I wish you every success in meeting whatever challenges lie ahead in fulfilling the hopes and aspirations of the British people, and contributing to the creation of a more peaceful world,” he concluded. (PTI)
British prime minister and senior lawmakers took an oath to King Charles III in the House of Commons, AP reported.
Following the passing of his mother Queen Elizabeth II at 96, King Charles III made his first address to the nation on Friday and paid tribute to his “darling wife’ Camilla. “I count on the loving help of my darling wife, Camilla. In recognition of her own loyal public service since our marriage 17 years ago, she becomes my Queen Consort,” he said.
King Charles III, who was officially proclaimed as Britain’s new monarch on Saturday, added: “I know she will bring to the demands of her new role the steadfast devotion to duty on which I have come to rely so much.” Read More
The Clarenceux King of Arms (a London officer of arms) read the second official proclamation in London’s Royal Exchange. As he proclaimed, he said ‘God Saved the King,’ and trumpeters sounded a royal salute. This marks the last ceremony in London.
A second Proclamation to declare Charles as the monarch has begun at the Royal Exchange in London. Watch here,

After the Council proceedings inside St.James’s Palace, a royal official publically proclaimed King Charles III as Britain’s new monarch. The public was allowed to attend this ceremony.
David White, the Garter King of Arms, read the proclamation from a balcony at the London royal residence flanked by trumpeters in gold-trimmed robes. Gun salutes rang out in Hyde Park, at the Tower of London, and at military sites around the UK as the proclamation was made. Scarlet-robed soldiers in the palace courtyard presented arms and doffed their bearskin hats in a royal salute. With trumpeters playing ‘God Save the King’ the ceremony was concluded.
-With AP inputs.
King Charles III has declared that the day of his mother’s funeral will be a public holiday. Charles approved the decision during his formal accession ceremony on Saturday.The date of Queen Elizabeth II’s state funeral has not been announced but is expected to be around Sept 19.
This will be the second extra public holiday for Britons this year – a holiday was declared in early June for celebrations to mark Elizabeth’s platinum jubilee, for 70 years on the throne. (AP)
With the official gun salute and trumpets playing ‘God Save the King,’ the official ceremony at St James’s Palace has concluded.
After the Garter King of Arms read the official proclamation of Charles as official King, God Save the King was played.
King Charles, Britain’s new monarch, on Saturday approved a Bank Holiday for the state funeral of his mother Queen Elizabeth. (Reuters)

After King Charles’s official address, Penny Mordaunt read the authorising of the proclamation, and oath, and King approved them.
Elizabeth has been the queen of Britain since 1952.  She came to the throne after the death of her father King George VI on Feb. 6, 1952, when she was just 25.She became monarch at a time when Britain retained much of its empire. It was emerging from the ravages of World War Two, with food rationing still in force and class and privilege still dominant in society.

Britain’s Queen Elizabeth, Prince Charles, Camilla, Duchess of Cornwall, Prince William and Catherine, Duchess of Cambridge, along with Princess Charlotte, Prince George and Prince Louis appear on the balcony of Buckingham Palace as part of Trooping the Colour parade during the Queen’s Platinum Jubilee celebrations in London, Britain, June 2, 2022. (File photo, Via Reuters)
Winston Churchill was the first prime minister who served during her reign, Joseph Stalin was the leader of the Soviet Union, the Korean War was raging.